Update on the power supply for the payload.

Below is a picture of the solar panels laid out more or less how they would be on the payload. Note that the panels on top are the higher capacity 1.5 watt units, producing 250ma at 6 volts. The side panels are smaller, producing only 1 watt and 167ma at 6 volts.  The 1.5 watt cells mass 43 grams each, and the 1 watt units mass 35 grams each. To get the four sides covered and the top would take 8 of the smaller cells and 2 of the larger cells, giving a total mass of (8 x 35) + (2 x 43) or 366 grams. That is a lot of mass. In the lower right corner you can see a solar panel to battery charger board, salvaged from a defunct cell phone charger unit. That little circuit has a mass of about 8 grams. A few diodes and other parts are needed to make this into a full blown power system, but the main parts are shown here. 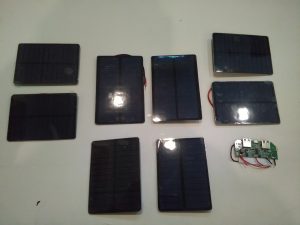 On Earth, in full sun, with all panels illuminated, the panels above should be able to produce over an amp at 6 volts. On Mars this will be reduced to 60%, and further as typically only one side of the probe will be illuminated at a time. By proper angling and use of the top panels, I hope to have a power input of 500ma during most of the day. It may be necessary to reduce the side panels to a single 250ma panel each to save mass.

Solar energy is “free energy.” On Mars, the Sun shines just as it does on Earth and we can use that radiant energy to generate electricity. Because Mars is farther from the Sun than Earth is, the intensity of light is much reduced on Mars. 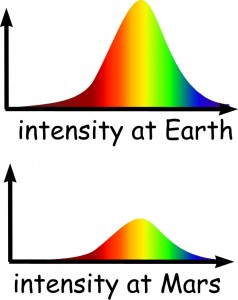 In fact, on the surface of Earth, at noon, solar energy is about 1000 W/m2. On Mars, the energy is only about 590 Wm2. So we have to figure at best, at noon, we only get 60% of what we would get at Earth. Even with this reduction, there is still a lot of power that the probe can tap into.

For testing, I purchased a variety of solar cells from Radio Shack. I have several of the 6 volt, 1watt units as well as a couple of the 6 volt, 1.5 watt units. The package says the 1.5 watt units produce 250ma maximum, presumably with sunlight shining right on them. On Earth this could charge a cell phone battery in about 10 hours. On Mars, we would need two of these cells to get the same power level. My little test current meter was pegged when I connected it directly to the 1.5watt unit in full sun a month or so ago!

For the balloon probe, we need to have at least two of these cells exposed at any time. With a square box for the payload, we would have two cells on each side. At worst we have two sides partly illuminated, which still should generate several hundred milliamps. At best we get two full on. Also, the top of the box would have one or two cells on it, and they would be illuminated at all times. We do need a circuit to block the cells off when the battery is charged or the cells are dark.

It is possible that we will have “too much” power during the daytime on Mars and could damage the batteries with too much current. The “extra” power would be good for running the camera, Raspberry Pi, flash storage, and radio which are all power hungry devices. Power design will be a balance between generation (solar cells), storage (lithium batteries), and consumption (instruments, radio, etc).