At this point, there are several battery options that can be considered for the Mars payload.

Shown below is the circuit found in a common $10 power cell for topping up a cell phone. This unit is rated at 2000 ma/h, and masses about 46 grams including the charger/converter. This will run a teensyduino and some instruments for hours. The battery here is a standard 18650 type. I have a two cell charger which stores 4000mah, and it masses 110 grams including case and circuit board.

For more run time, larger batteries can be substituted. I bought these 26650 units at Radio Shack a few months ago. These batteries will store 3500 mah, and mass about 96 grams each. Two them them would provide for 7000 mah at a total mass of about 192 grams. 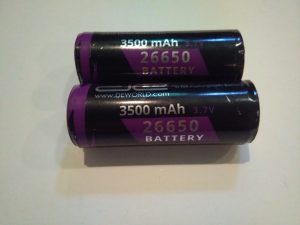 The cells for the Note III provide 3200 mah, and mass only 55 grams. This would allow for 6400 mah at a total mass of 110 grams. The difference may not sound like much, but it amounts to the mass of the instruments in the payload.

I hope to put together a test power supply, charge it up, and see how long I can run the teensy 3.x from it soon.

I have run a test using the Teensyduino 3.2 that I purchased a while back. When I soldered this unit headers on, I added a bit of protoboard so I can have the extra pins that are under the unit brought out to pins for the prototype. Note that with this $5, 2200MaH battery from Staples, I was able to run the processor for over 20 hours with the LEDs on pwm. Given that the payload only needs to run purely from battery while in the dark, a runtime of 12 hours or so is needed. Doubling the amperage to get 4000 or 5000 should then do the trick.

Note on 2/29/16. While looking into power consumption for the Raspberry Pi, I came across this page: http://www.makeuseof.com/tag/pi-go-x-ways-powering-raspberry-pi-portable-projects/

This has some good basic information and ideas for powering the Pi. The Arduino takes less power than the Pi, so runtimes should be longer. (According to one source, the Pi 3 takes 480ma to run. That is something like 5x the requirements of an Arduino class device and a major impact for battery capacity.)

Here is a link to a solar battery charger:

There seem to be a fair number of the solar battery charger boards, which cost about $10. I hope to pick one up soon and begin testing with the battery and panels (now that we have sun again in Maryland.)

For testing purposes, I picked up some cell phone batteries at the local Radio Shack when the batteries were on deep discount. The ones that I bought are almost identical to this unit, but for the Note III. They have something like 3000 milliamp/hours of storage, but are 3.8 volts.

The battery is in a charging cradle, so the actual battery is a lot smaller and lighter. Even so, the number of batteries, and hence run time on battery only, needs to be balanced against the mass budget of the whole balloon payload.

There are also a lot of cell phone battery extenders. These are charged up via a 5volt USB connection, then you plug you phone in while on the road and they charge your phone.