After doing some work with the RFM69HCW feather, I purchased some of the integrated boards from Adafruit. These boards contain a processor as well as the radio daughter board. The radio board is attached to where the prototype space would be on the standard M0 feather boards. Having the radio board on the development board makes the end product smaller, lighter, and the wiring is also taken care of.

The NRF52840 board is a little different. Because the NRF52840 includes the processor and the radio module, the board is less complex than the other two boards and does not have the daughter board soldered on. Note that the NRF52840 does not seem to play well with the M0 feathers. When I attempted to add the board when the M0 had already been added, the compiler did not function correctly. Installing the NRF in a new version of Arduino fixed this issue but questions still remain.

See the images below for the board images.

The first is the 1500 board. As noted elsewhere, my board uses the UFL connector for antenna. 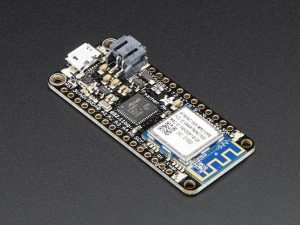 This is the RFM69HCW. Much more compact than having the M0 board wired to the radio on a feather board. 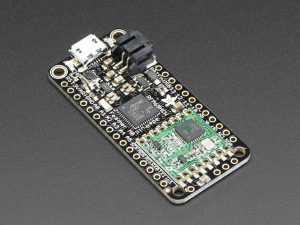 Here is the NRF52840 board. Very compact and clean. The black connector in the center is for programming using other tools and is not necessary in flight hardware, saving a fraction of a gram. The headers shown may not be needed and are quite heavy due to the metal. Depending on the sensors needed, only half a dozen connections may be needed. Note the neopixel on this board. Might be good for feedback but need a simple example of how to use it. 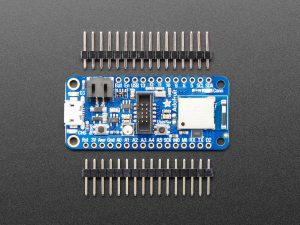