The spacecraft sent to Mars will consist of two main assemblies. The first is the aeroshell, which contains the balloon, payload, and associated hardware. The second assembly is the cruise stage assembly, which provides power and radio for the probe during the transit from Earth to Mars.

In the images below, you can see the two assemblies for the Mars Pathfinder mission. Note that the balloon and payload will mass less than the Pathfinder lander/rover combination. I estimate that the reduced size and mass of the current mission would only require an aeroshell about half the size of the Pathfinder.

The internals of the two stages would be similar to the diagram below. 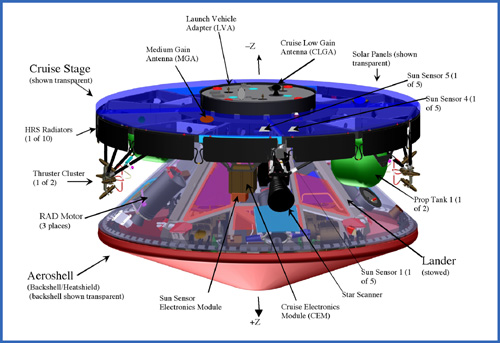 Note that by changing the orbital path, it may be possible to place the lighter weight items in a Mars trajectory for less fuel in exchange for longer time to orbit. See this document for further information: Earth-Mars Ballistic Transfer from Belbruno