The purchase of the Arduino 2560 provided the initial impetus to work on the balloon instruments. When Radio Shack was having their fire sale, I picked up an Arduino Uno for a very good price.

The 2560 has tons of I/O, including analog, digital, and pwm. It also works fine with 5 volt devices.

What the 2560 lacks are RAM and a built in sdcard reader. I was able to expand the RAM as a test based on the circuits from the Internet. This circuit required lots of wiring however and required special compiler directives to use the memory, in addition to having a speed penalty.

I did use the 2560 and uno for testing of most of the break out boards as the libraries worked out of the box.

After testing the hardware I decided to move to a more capable development board, and have since used the Arduino boards just for testing new breakouts.

Image of the 2560, note the large number of input/output lines.

256k of flash, 8k of RAM, 4k of EEPROM. This unit has 54 I/O lines, which makes is an I/O monster. You have 16 analog input pins, 15 pwm lines. The speed is 16Mhz. Note the extra set of pins on right end. That is specific to the higher end arduinos, and includes the ports used for the memory expansion. 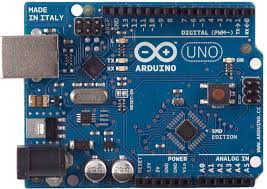 Technical specs for the uno: