The payload is kept aloft by a balloon. In theory, a hydrogen balloon would be operational at Mars because the O2 level is so low it would not burn. However, there seem to be many issues with using H2 as the gas, including outgassing on the mission to Mars, difficulty in keeping the gas in the balloon, etc. So, He2 seems to be the better option. 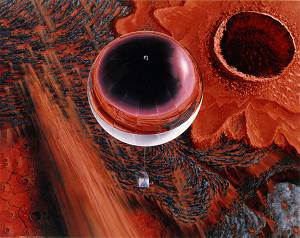 The balloon fabric needs to be really light weight. Something like polyethylene would work. Think of grocery store plastic sacks. Some calculations you see online use mylar, which is stronger, but it is much heavier and every ounce counts on Mars.

The balloon needs to be able to support a payload of several kilograms for the mission duration, which would be several weeks or more.

The balloon would be inflated in air, after the heat shield and parachute have done their jobs and slowed the capsule to subsonic speeds.

If the balloon were colored brightly (IE, white or reflective), it might be visible from the orbiter which would be helpful in tracking the probe.

I estimate the balloon size to be 10 meters in diameter, but this is a guess based on some preliminary  web surfing and not computed out yet.